Showing posts from October, 2009
Show all

By DougV - October 22, 2009
So a few posts ago I talked about how my PayPal account had been compromised, and I lost almost $500 from my checking account.  Well, since then I've had absolutely the worst luck of any person I know of.  I mean, it's like literally every single thing in my house or in my name decided it's about time to break, die, or fall apart. We'll start with the PayPal debacle. That was unfortunate luck, and it sucked when it happened, but eventually the bank sorted it all out, and I got my money back.  It just scared the crap out of me that at any time $500 could simply disappear from your bank account without doing anything wrong. Xbox 360 - I got the Red Ring of Death (RROD) two weeks ago, and the hardware that I used the most in my entertainment system (watching movies, TV shows, Netflix, etc.) is completely dead and will cost $100 to fix ASUS WL-500W router - While I was playing a video game one night (on my PS3 because the Xbox was already dead), I got a funny message s
Post a Comment
Read more

By Mr. Misanthropology - October 20, 2009
So...it's been a month since I've written an update for O2D. If either of my readers were wondering why this might be, well part of it is explained by Doug's update below and my response to it, and the rest can be explained by using today as a microcosm of my life over the past month. Viewer Discretion Advised... About a year and a half ago I had a job that I quite enjoyed and that I was rather good at. My boss would say, "do this" and I would do it. I would write a grant application, I would write a presentation, I would have a meeting about a program, I would do lunch, I would meet with a loan applicant, I would talk to the players and be there as deals were done. I may be romanticizing a bit, but I never woke up dreading the day ahead and I never thought my life sucked. Sure, I wanted more money, and I was a bit concerned that there was very little room for advancement since my boss showed no signs of retiring ever...but at least he was a great guy and a good b
1 comment
Read more

By DougV - October 06, 2009
So after so many months of trying out various social networking services to keep in touch with family and friends, I've got one final conclusion: There are too damn many social networking sites. While I can definitely see the intrinsic value of keeping in touch with old friends, or using micro-blogging as a means of advertising, it's simply too much to keep up with on a regular basis.  Or I should say, it's nearly impossible to keep up with all of them. If you have a day-job, your company likely blocked many services (like Facebook, Twitter, AIM, etc.) so keeping up to date with them becomes a full-time job outside of work.  I don't care enough about all the things going on with my friends or my friends' kids/dogs/cats/etc. to have to have fresh news delivered to me via wall updates or tweets. At some point there is a saturation level that one can reach that it all becomes overwhelming. If I had to remember to carry on this many conversations at work as I try to
1 comment
Read more

So after going to my local bank's branch office, and signing 24 copies of the form that says "Under penalty of perjury, I did not authorize these charges" I had a hand-cramp.  In speaking with the bank representative, he said that upon working with his ACH department he discovered that of all the unauthorized fund transfer complaints submitted to them - 93% were related to PayPal transactions. It turns out PayPal may have really screwed up here in terms of what happened with my account, and how the charges were applied without my knowledge or authorization. It says on PayPal's own website "As a fraud-prevention measure, we send an email confirmation for every online PayPal payment that you make." That means I should have received 24 emails from PayPal - one for each transaction as it would have been authorized with my authentication via the website. This simple fact apparently slipped their minds when they tried to explain how the unauthorized charges may
Post a Comment
Read more 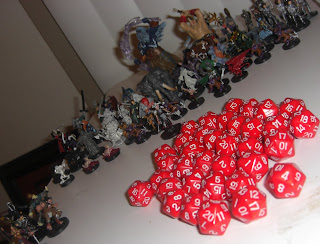 So our first official foray into Dungeons & Dragon's Fourth Edition was completed on Saturday. After weeks of prep, I finally unveiled my baby to our Playgroup: Mr. Misanthropology and his Mrs, DougV, and a gamer couple, Mr. Ego and Ms. Thrace. They played a Druid, a Rogue, a Warlock, A greatweapon Fighter, and a Paladin. At first I was worried that not having a dedicated healer would be a problem, but Thrace handled everything perfectly. And it was fun. But... Some things didn't work. We had originally decided to have the session around a big ol' dining room table, but afterwards people complained of being stiff. I completely understand: I think my enthusiasm for my storyline was the only thing to keep me jumping and hoping at the table. My excitement also underscored another problem: they wanted frequent breaks but I didn't want any. This is a symptom that is easy to remedy. Caught up in the creation of my epic story, I lost sight of the goal: just to have fun.
Post a Comment
Read more
More posts