Dirty Laundry - Do you like the way I smell?

By DougV - August 10, 2009
It's been a long time since I've really thought about laundry.  Luckily, I have a wife and sister-in-law who successfully manage our dirty clothes on a regular basis, so I have nice clean pants to wear every day.  When I was in college, the laundry was always a dreaded ordeal, because the pile I usually had at the end of the month was more than one person could carry.  It usually cost $30 in total for all the washing/drying to be complete and took at least 7-8 hours - basically an entire day to complete.  You see, I had at least 30 pairs of boxes so that I could go a month between laundry days.  It was helpful because I find the repeating, non-stop task of laundry (and dishes too) incredibly monotonous and annoying.  I understand that there are those repetitious tasks in life that are unavoidable... there are even some repeating tasks that aren't all that annoying... but sometimes there are tasks that feel like they're sucking the life out of you one load after another. 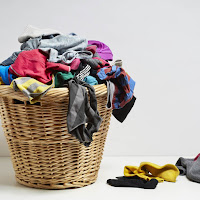 Case in point: this weekend I went to see a movie with a couple friends (by the way: GI Joe is stupid), and we stopped on the way home because my wife asked me to buy some batteries for my daughter's toys.  While we were there one of my buddies (who shall remain nameless for the sake of him getting into trouble with his wife) decided to buy some packs of socks because he didn't feel like doing laundry when he got home.  I'll assume that's because if he started doing the laundry, it would have been pointless to only wash some socks, but leave the rest in a dirty pile.  I can certainly appreciate that situation.  Once you start something as time-consuming as laundry, it's not worth half-assing it only to have to do it again sooner rather than later.

This whole idea brings me to another thought.  I've heard the phrase "airing dirty laundry" and it made me curious.  What is it about clothes that makes them a suitable metaphor for accidentally or inadvertently having too much information made public about a touchy or personal subject?  I don't believe that clothing is necessarily a private thing.  Undergarments and such are worn by everyone (except perhaps dirty hippies - I hate those guys), so it's safe to say that everyone has seen a skid mark or two... Why don't we want people to see something as universally understood as dirty clothes?  I definitely don't wash my car as often as I wash my clothes, and I certainly don't wash my shoes - if at all.  Yet, I use them daily, they're publicly visible by just about everyone, and they definitely get a whole lot dirtier than one of my polo shirts I wear to work.
dirty socks laundry