I have finally reached the point at which I am completely frustrated with my computer. Frakk you, vista 64!

You see, I always have loved computer games. From my birth, I cannot remember a time where the glowing screen did not fill some part of my life: whether it was Mario and his dog, or rescuing civilians in a helicopter, At a very young age video games have made their way into my experience of stories and narratives. Maybe that is why I like fantasy so much: it allows me to escape and experience an adventure that I may not be able to myself. Or maybe that’s why I like video games, because of the fantasy involved.

At any rate, Microsoft and vista have robbed me of the ability to play my favorite game: The Summoning. An epic masterpiece of adventure/roleplaying games, The Summoning was my first taste of a complex, subtle story where decisions must be made in order to progress but have effects on the gameplay without actually changing the story. It was less choose-your-own-adventure and more make your own yellow-brick road.

In the game, you play a no-name (or, rather an any name) character who is sent to the Citadel to stop The Shadow Weaver. You train in weapons and magic and you show up, isometric 2D style, with naught but a cheap weapon and a spell to your name. It was amazing! The game manual was huge. I remember taking it to school with me and reading the story. Imaging, day in and day out, what I would do next in the game. It rewarded you for your immersion, too.

It was the first game that I played that had a real RPG feel to it. As you used weapons, you became more proficient in them; the same with magic. Oh, the magic system. It was like Sign-language on steroids, you went through the game learning the alphabet in finger signs. Then, each “letter” was used in a certain combination to create spells. The best part? Once you learned all of the letters, you could guess at the spells! I remember with great triumph guessing the 4 way fireball spell. I still know some spells by heart (FACF is the swiftness spell… you always did move a little slow for my tastes). There was balance in the game, too: weapons broke, mana ran out. 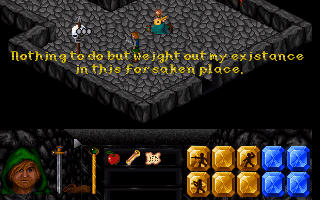 The story, however, dwarfed everything. Literally. It was huge. It took me 5 months to finish it without cheating. It wasn’t hard, it was just epic. You start out learning the story piecemeal, talking to people, learning—the hard way—that you’re starting after your side has lost. Your entrance to the citadel was one way and the exit is far, far away. Imagine a book of mazes, except each page continues onto the next until you get to the end. That’s the Summoning. There are plot twists and talking weapons (some are just skulls and some are just bad-ass). There are thinking puzzles from the very beginning and you can get lost. You save often, retrace your steps and just… get… lost. It is amazing!

But my epic-fast computer: fast enough to play the Sims and World of Warcraft, can’t handle it. Stupid 64 bit, quad-core processors.