Eat Crap, Hossa. And other thoughts. 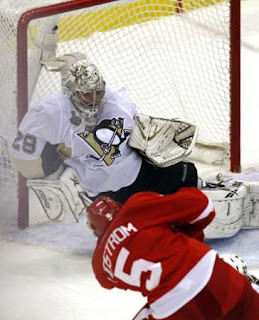 But it worked. Youngest captain to lift the cup. First Russian to win the Conne Smythe. Every single gut-wrenching, heart attack-inducing moment was glorified by the last 6 seconds of game 7. Call it the Immaculate Rejection.

a long, long weekend later I still can't believe it. Our boys won. Fluery, Staal, Talbot, Malkin, Crosby--those young superstars that we have for years that maybe needed one more season to mature--don't need to prove anything else. They've done it: they have rings, now.

As I was pondering the enormity of what happened on friday, I realized:

Guerin and his 18 kids get to play with the Cup this summer.
As does Gonchar and his kids.
Hell, even Garon gets a ring.

For those that didn't know, I went to Canad-ia in the middle of the finals to play in a tournament of my own. As a proud Monroeville Zombie, I held the blue line in our amazing 0-3 run to the bottom of the ladder.

We were even defeated by a team named "Dead Last." But I would not have traded the experience for the world. I met people I will never forget. I laughed until my face hurt. I played until my everything ached. And it looks like I'll be doing it again.

In about 3 weeks, Kevin Smith has invited all of the View Askew teams that participated in the previous tournament to play some street hockey in his home town of Red Bank, New Jersey.

The zombies will not fall again. Or if we do it will just be to rise up again... Because we're, like, zombies and stuff.
hockey street hockey zombies