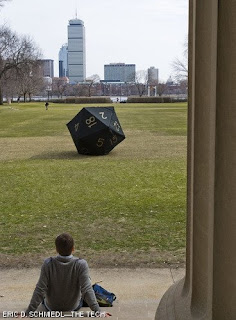 I've been seeing more and more online celebrities talking and writing about playing real RPGs (Role Playing Games - the kind with dice and paper, not some MMORPGOMGLOLZBBQ).  They're also taking part in some new and exciting forms of nerd-tainment.  Scott Kurtz has been twittering updates of his RPG campaign and uploading shots of his game boards and dice.  He even went so far as to write in a D&D (that's Dungeons and Dragons) story line into his web comic - PvP.  Wil Weaton is playing a geek in his appearance on the show Leverage, and even Nathan Fillion (star of Firefly and Dr. Horrible's Sing Along Blog) got to be the voice actor for the main character in the upcoming game Halo 3: ODST.  It seems more and more famous people are starting to move their campaigns and careers towards a techno-centric style and it's working really well for those willing to embrace their inner geek.

It's been several years since my friends and I rolled up some characters and played some RPGs.  My wife used to kid around and call them our "Geek Parties."  When I'd tell her we were going to be playing an RPG, she laughed, but understood it was our way of enjoying social interaction with a side of fantasy.  A while ago one of the guys I work with made a joke about an RPG and we ended up getting into a deep discussion about the crazy games we used to play till 4 and 5 in the morning.  We reminisced about rolling characters, going on missions, being the DM (Dungeon Master - aka the person who runs the game), and just having fun with it.

Now there are literally millions of people playing online games on consoles and PCs and that have become truly engaged in the geek culture and lifestyle.  Some of us are more hardcore than others, but our devotion is simply our way of being involved in those things that we truly enjoy - games and technology.  Take for instance the Halo games series.  The first Halo only allowed you to play locally across a network - you could have 4 people on one console, but if we wanted more, you'd have to hook up 4 consoles to get up to 16 people running at the same time.  I've had the opportunity to not only go to one of these "Halo Parties" but I've gotten the chance to host a few of my own.  Halo 2 and 3 came out and let you play across Xbox Live, but I most enjoyed hooking up a few big TVs and running some network cable to get lots of people in the game at once.

It's been quite a while since the last time I hosted or went to a "Halo Party."  Hopefully, I'll be able to have one again someday soon...
gaming Halo nerd Video Games