By DougV - June 30, 2009
Well, it's time to open another chapter in my life. I've officially entered what's most likely the later half of my life.  I know people talk about 40 being the so-called "hill" and that you're on your way out when you get to be that old... but I think living till I'm 80 would definitely be blind optimism.  I've got a family history that reads like a cardiologist's nightmare (or wet dream).  The family history's also got about 9 different types of cancer, and several other wonderful medical conditions that could end my life sooner than the average life expectancy of 75 or whatever it is now.  Not only that, but I had to begin taking blood pressure medicine about 3 months ago - apparently high blood pressure also runs in the family, and can be a serious problem if not managed.  Yeah, I'm doomed. 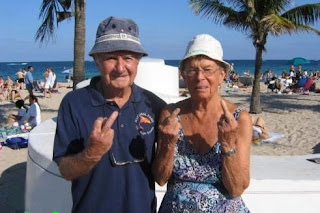 In reality which we're all slaves to, death is inevitable.  We can't run away from it, we can try to hide the slow progression to our end, but regardless of any efforts, we're all going to die.  Gloomy...  but one thing I've learned in the past 30 years is that no matter how bleak things seem, hope can keep you going.  The hope that a pretty girl might kiss me got me through high school.  The hope that I could get a real job after college kept me striving to get good grades (3.49 GPA isn't too shabby).  The hope that my baby girl would be OK before I got to meet her kept me strong when my wife was pregnant.  Hope is definitely a powerful force.  It's the one thing about humanity that is one of our greatest weaknesses and strengths at the same time (yes - I just quoted a cliche from Sci-Fi movies).

There are certainly some weaknesses we humans could work on.  It brings to mind a study done recently about humans acting irrationally.  It made me chuckle to read it because I can certainly visualize some schmuck who was offered FREE MONEY turning it down because they weren't given what they perceived to be a fair share of FREE MONEY.  Come on people, be happy with what you get.  It's either that or nothing... and I'll take money every time.

Don't cry because your life sucks, getting old and having gray hair are all parts of life that we can't avoid.  I don't mind the idea that life goes on.  I look back at the last 30 years and I see so many good things that happened.  Granted, the US has basically been in wars the entire time I've been alive - from Korean War to Desert Storm, and now Iraqi Freedom.  In the midst of all that conflict we've been able to innovate and thrive, new technologies and ideas have never flowed so freely or been so available as they are now.  The world is completely anew, and that's hopeful.

It's hard to have a positive outlook sometimes, but I think having hit a major milestone (other than getting married or becoming a father) like this makes it hard not to look forward to what's next.
30 years old age culture free money getting old