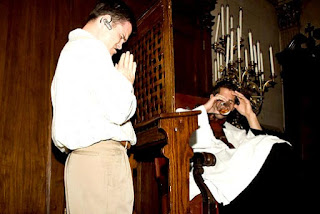 Politicians do confessing all wrong. They always seem to wait until they've been caught on something instead of airing it out, getting in front of it, and letting it go away by itself. I can recall three high-profile affairs confessed to in the past year, and if rumors are true, my very own governor may be next.

In the spirit of living my life better than a politician in every conceivable way, I've decided I have some confessing to do, and what better venue than my internet readership of three people. Also, the speech act is one of my favorite quirks of language, so I'll take any opportunity to act through words. I hereby confess:
Dorkitude Loserdom Nerdhood