An idea for everyone to get worked up over 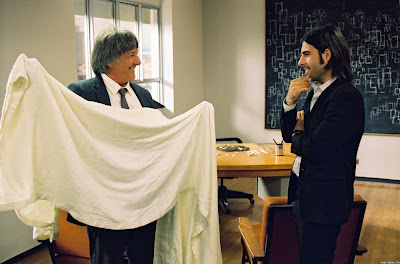 I almost got punched at a party over this one, but I still believe it to be at least 50% true, so I think I need to get it out there to at least have the option of a conversation on the topic. I live my life, as everyone does, between the small and big pictures. I recognize that my actions have consequences in my life, and I recognize that my life has an infinitesimally small, approaching zero effect on the universe. In fact, to borrow a misuse of ’s first law, every one of my actions is met by an equal and opposing reaction, so I’m really just a random motion in the giant equilibrium machine of existence. I’m mentally at the end of I ♥ Huckabee’s where they realize that everything is connected, but it’s nothing special.

Here’s my problem, I grew up in the culture that changed “whatever” from a pronoun to a sentence. Today, that attitude is unacceptable. Today we have two generations bookending the Xers that are acting like the should add apathy to make 8 deadly sins. We have a governor resigning because “a problem in our country today is apathy.” I have an issue with that because caring too much can be a huge problem, but you never hear people in public life getting upset about participation. You might not like their positions, but at least they’re participating and that’s what democracy is all about, right. I am totally sick of Gen Y and all their rah-rah bullshit and the boomers beaming proudly and saying, “look how involved the youth are.” I’m not just being a curmudgeon because I can’t stand kids these days. I’m upset about something I think we’re losing. A little something I like to call radical apathy.

Everyone who’s ever gone to a twelve-step meeting knows there are things we can’t change, but that concept seems to be lost on our society lately. Everyone wants to change everything, but we’re always 50/50 on which way we want to change it. Now that we’ve picked sides, we’re fighting with all the venom in the darkest parts of our souls to prove, more to ourselves than anyone else, that the other side is full of disgusting monsters. This kicks in the tribe mentality function of our lower brain, and woe unto logic presenting itself before a tribe.

Radical apathy is the idea that change happens with or without participation. Change is a natural phenomenon that has always existed, and change is something over which we have but marginal control at best. Change is also something we suck at as humans as noted by the lazy journalists’ stories every January about how fitness memberships are up, but are likely to decline to average rates by March. Radical apathy believes that there are some ideas worth advocating, but almost none worth a fight. Radical apathy is not nihilism. Radical apathy recognizes that there are some good ideas out there in the teachings of conservatives, liberals, Hindus, Christians, Muslims, Jews, Buddhists, Yankees fans and Red Sox fans, but that all those thought systems have enough common ground that there’s no point in killing or dying for one over the other.

Radical apathy let’s you get out there and live long and meaningfully in your short, pointless life without getting caught in the traps being set by people who only live to start an argument. Radical apathy is the idea that life is what it is, is what it’s going to change into, and is best suited to the adaptable. Radical apathy recognizes that some things are unfortunate, but that unfortunate things are always happening no matter how many you stop of one variety or another. It recognizes that “fair” is a construct of our minds and never means the same thing to two different people. Radical apathy does what it can to be happy and to make others happy, but realizes that conflict causes unhappiness. Radical apathy can work hard and relax hard; it cares about what’s going on right now, not what happened or what might happen. Radical apathy likes your brand new shirt and thinks it looks great with those jeans you bought ten years ago with the holes in them; it thinks both will look good with your next hair cut.